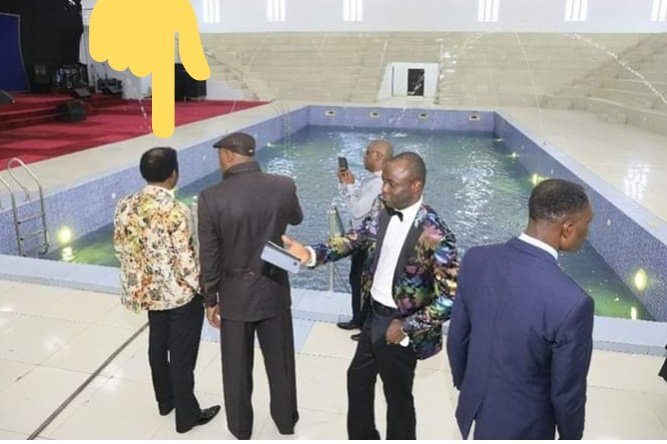 Remember Pastor Joshua Iginla of the Champions Royal Assembly, Abuja who divorced his wife after seven years of marital crises? He is in the news again for the wrong reasons.

This time it is not about an extramarital affair which he had publicly confessed to a few months ago and pleaded for mercy from his congregants.

Iginla has been accused of charging members and deliverance-seekers N50,000 to swim in a pool he built in his church and receive instant healing.

In March this year, the Abuja-based pastor became an object of internet trolling after announcing to his members, during a church service, that he had divorced his wife, citing infidelity and irreconcilable differences as the cause.

Iginla admitted to cheating on his estranged wife Yemisi, which resulted in a child, he also said his wife had a child for another man during the period the marriage lasted.

Bygones are now bygones we thought and the uproar raised by his action eight months ago seems to have wane out, but Iginla is in the eye of the storm again over allegations of commercialising healing.

We thought healing is free just like salvation, well if the allegations currently rocking Iginla turn out to be true, then healing may not be free again and evangelism may be in dire need of funds to maintain private jets.

A Twitter user, Kelvin Odanz, in a thread of tweets via his handle @MrOdanz, revealed that an indoor pool that looks like an Olympic-size has been built in Iginla’s church and access to the pool attracts a fee.

Well, the last time we heard about a healing pool was during the earthly ministry of Jesus. According to the account of the Christians’ Bible in the fifth chapter of the Gospel of John, Jesus healed a man who had been paralysed for 38 years beside a pool called Bethesda and there was no record of payment after the healing.

But at Prophet Iginla’s church in Kubwa area of Abuja, it doesn’t work that way, there are claims that such intervention attracts a huge fee.

Iginla, who joined the league of Nigerian pastors with private jets in May this year, also named his private pool the ‘Pool of Bethesda’ because, like the biblical pool, it is also believed to have healing powers that cure any form of ailment once the sick make their way into it.

“There is this church in Abuja with a weird flex. The pastor built a swimming pool in the church premises and called it “pool of bethsheba” or something. The pool has healing powers. Enter and your problems disappear. If you want to enter the pool, you have to pay 50K per swim.

“For those who are too poor to pay 50K, there is an anointed bottle water sourced from the “pool of Bethsheba.” It goes for 10K. I am not sure it has as much healing power as paying 50K to submerge yourself in the pool itself. I mean, you cannot cheat God. It issa Pay as you go.

“One certain Sundays, the Pastor does spiritual promo. That means he will let you bath in the pool, all expense paid by God. Even God Sabi do promo”.

“And of course God is blessing the members of the church who are already rich because they work hard. No shortcuts to heaven dear The Pastor of this Church is, or course, eccentric like the average Nigerian Pentecostal Pastor. Fire for fire Ministry.The man got another woman pregnant while he was married. I think some fine ass South African woman.I mean, even Pastor like big bum bum. Cherish God’s creation”

“After plenty scandal, he divorced his wife and settled down with his fine ass South African Queen with big bum bum. Of course the Church is still marching on, the gates of hell shall not prevail. People still troop in”.

“I mean, who can battle with the Lord? Not some sex scandal. I will like to mention the name of the Church and the Pastor but I don’t want the wrath of God to finally descend on me. I am a God-fearing man! But hey, anyone who tells you religion is not too 2 the biggest problem of Nigeria is deceiving you. Religion is our own Cancer!”

“Just a hint: The Church is located somewhere around Kubwa. I think after Kubwa or so. Religion loves Poverty. Yeah If Jack Thanos my account again, I will pay 50K, strip naked and enter that pool with his name in my mouth”.

“Btw, if you need Bethsheba water, I sell at a discount. A very nice Brother finally shared an image from the pool of Bethsheba. I kid you not, this is the pool. I think it is inside the Church gan gan. The most high God dwells in our midsts. You can check out YouTube for videos of his healing sessions. Or Facebook. Just as a snippet.”

Meanwhile, another Twitter user has shared a video of the pool.

In the footage, members of the church were seen taking turns to enter the pool.

Some men believed to be church workers carried a supposed paralysed man on a stretcher into the pool, and the man walked out shortly after being baptised in the pool. The commentator said he had been healed of his paralysis.