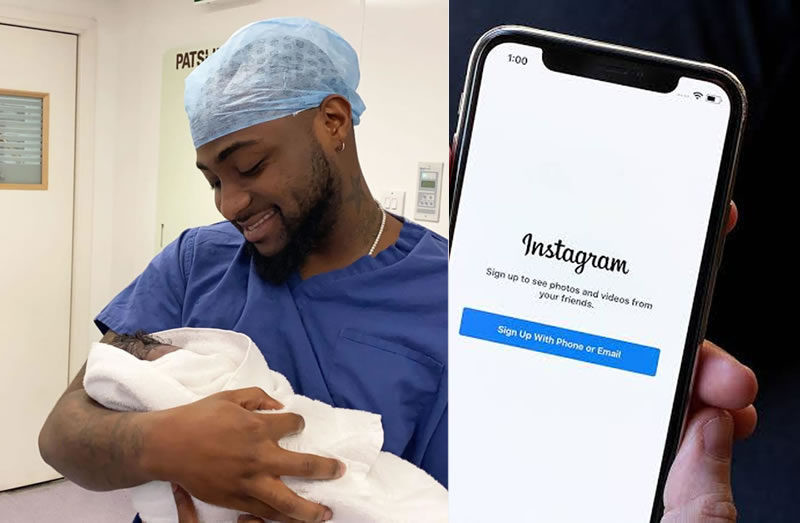 Less than 48 hours after afro-pop artiste, Davido, announced the birth of his son, David Adedeji Ifeanyi Adeleke Jr, the child already has over 200 accounts on Instagram.

This was revealed by rap artiste, Aboriomoh Femi Raymond, better known as  Dremo.

The 25-year-old made the claim in a tweet on Sunday evening after Davido announced the birth of his first child with fiancée, Chioma Rowland.

“David pikin never even start to dey talk or crawl and him don get over 200 fake Instagram accounts. na wa!!!” Dremo wrote in Pidgin English.

David pikin never even start to dey talk or crawl

WuzupNigeria reports that Davido had shared the first photo of his and Chioma Rowland’s newborn baby boy on Instagram.

MORE READING!  Warri: Man kills self after impregnating his daughter

The duo have been in a whirlwind romance for a while now, with the singer dropping a single titled ‘Assurance’ to profess his undying love for the Imo State beauty.

Davido formally proposed to Chioma in September at a dinner held in a London restaurant. The engagement came 10 days after the couple’s family had an introduction in Lagos.

MORE READING!  Peter Okoye to Cynthia Morgan: You rejected my contract just because they made you see me as a bad egg

Dremo was signed to Davido’s DMW record label in 2016 and has since recorded a music project, Codename Vol, 1.

Davido’s son fake Instagram accounts may have been created by fraudsters, aiming to scam people off their hard-earned money and they may just be innocent parody accounts.

WuzupNigeria further reports that Nigeria is constantly in international news for wire fraud committed by her citizens. It would be recalled that in August the FBI had arrested many Nigerians over their involvement in a $46m online scam.

Also in August, respected socialite and Forbes-celebrated Nigerian young entrepreneur, Invictus Obi, was arrested by the FBI. He was alleged to have been involved in a $12m wire scam.

The Economic and Finacial Crimes Commission [EFCC], an agency set up by the Olusegun Obasanjo’s administration in 2003, has recently stepped up the crackdown on suspected cybercriminals. In September, the agency arrested 113 suspected yahoo boys – the name given to online fraudsters in Nigeria – in three states.

Bidemi Kosoko reels out testimonies as she celebrates 31st birthday

MORE READING!  Don't ever tell people how much you earn, it is a bad idea, Nigerian man warns
Continue Reading